Tony Harrison is a Trustee at PAPYRUS and alongside many other things has campaigned to raise awareness of suicide and to help shatter the myths and stigma through both local and national press. He has kindly shared his thoughts on getting through Father’s Day after losing his only child, Vicky, to suicide.

When my only child Vicky took her own life, one of the things that kept going over and over in my mind was “Am I still a dad?” and “How can I be a dad if there is no-one here who calls me dad?” That was something that really upset me and troubled me. This makes ‘Father’s Day’ a very difficult day.

For me it’s the second worst day after Vicky’s anniversary. I so miss the cards. The cards. Oh, I so looked forward to the cards. They were written out so wonderfully thoughtful and loving; almost cried every year when I got one. Now I cry because I don’t get a card.

That was in the early days but what about now though? Well, now if I get asked if I’m a dad it’s a simple answer: Damn right I’m a dad and yeah I have a daughter. That Vicky is in a place, wherever that place may be and whatever that place is called, I’m still a dad! And I always will be.

So how do you get through the second worst day of the year and not forgetting it’s a nationally recognised day which highlights it even more. It’s tough, no getting away from that. I’ve now had a few years “practice” at getting through it. I will visit the cemetery, of course, and spend quite a while there too. Doing this keeps me away from social media and anywhere else where there will be celebrations aplenty.

I like to have a quiet day. I also make sure I have my evening meal all cooked and ready the day before because I know I won’t have the motivation to cook something decent on the day. So, out of the fridge and into the microwave and at least I will eat properly which is important. Sometimes I may visit someone if I feel the need for company but generally I only know if I want that on the actual day, so creating and having options is important.

Whatever works for you is the best way. Some of you will have other children or if you’re lucky enough grandchildren who can keep you occupied which could help get you through the day relatively unscathed!

Remember, the day will come and the day will go. Yes, it’s a bad day but there is still just 24 hours in it. Ride the waves and come out the other side. I wish you all a peaceful a mind as possible. Take care.

We would like to say thank you to Tony for sharing this with us.

We would just like to say that during difficult times HOPELINEUK can support you if you are having thoughts of Suicide. There is also a national charity called Survivors of Bereavement by Suicide (SOBS) which provides dedicated support to adults (18 +) who have been bereaved by suicide, and you can search for local support groups in your area by going on their website: http://uk-sobs.org.uk/support-group/

To hear Tony reading out his thoughts please watch the video below: 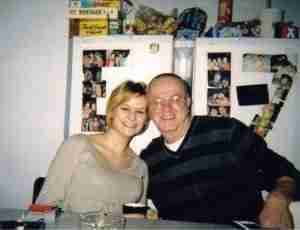